This was the first edition that started the successful series. It contains quotable quotes and fascinating industry insight. It looks at the people, the products, and the companies that made the industry what it is today. 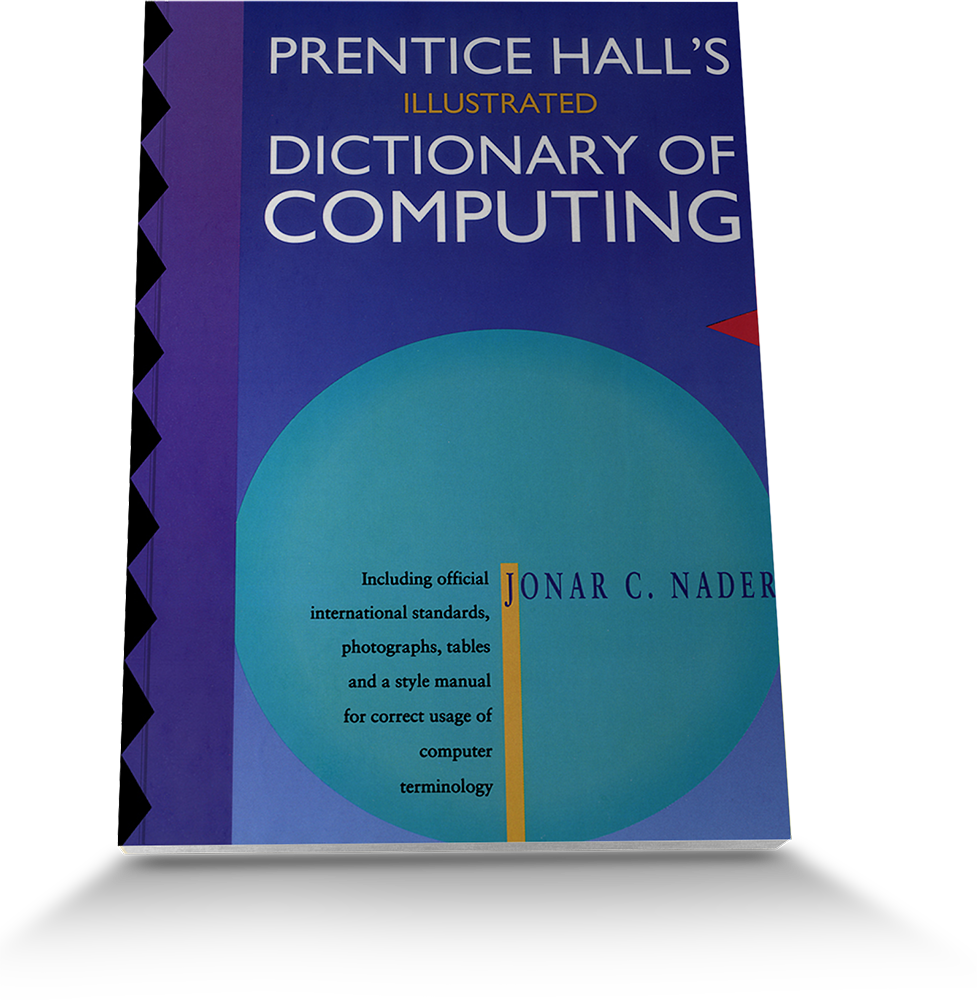 It has been said that if cars had developed at the same pace that computers have, today a Ferrari would cost $5.50, drive five million kilometres on one litre of petrol, and park comfortably on the head of a pin. And, jokingly, it was also said that a 500-page instruction manual would be required to explain to its owner how to open the door.

With advances in technology, is it any wonder the average computer-user is baffled by the terminology.

This was the first edition that started the successful series. It contains quotable quotes and fascinating industry insight. It looks at the people, the products, and the companies that made the industry what it is today. Although many of the faces have changed, their impact is recorded in this historic volume.

This dictionary was published in 1992 as the first broad-based dictionary to contain official international standards, photographs, tables, and a style manual for correct computer usage.

Since then, the second and third editions have been published.

The author, Jonar Nader, says, ‘There are two schools of lexicography; one that mimics the confused society and merely reports the jargon at hand, and one that defines, shapes, determines, and investigates terms as a judge would.

‘To some people, words might seem insignificant, and dictionaries might seem to be unimportant. However, our words are our definition; they determine our thoughts. We are what we think, we think what we know, and we know what we can articulate. Treat words with contempt, and we stand to lose the point of order.’

Prentice Hall’s Illustrated Dictionary of Computing is ideal for anyone who uses, writes about, or reads about computers and computing. Prior to the launch of the first edition back in 1992, an authoritative, accurate reference was desperately needed.
Today, almost every field of endeavour relies on some form of computer. Even the car salesperson has to explain to the buyers what the latest electronic gadgets are all about. The student is swamped with computer jargon, and the chef has to decipher operating-instructions for computerised appliances.

Students, teachers, business executives, and people who work within the computer industry can benefit from this book.

To use this book effectively, special skills are not required because each entry in the book caters for the novice and the technically-competent, giving a very simple explanation for the beginner, plus additional technical information for those who are more advanced. However, each entry can still be understood by non-technical readers.

“The computer technology revolution is sweeping the home, office, school, and place of leisure,” said Jonar Nader. “Unprecedented growth within the computer industry has led to communications problems; with each manufacturer devising a new set of standards, and speaking a different language — disregarding fundamental rules of English and mathematics.

“Societies have adopted standards for common weights and measures for every field of business. However, it seems that in developing new acronyms, abbreviations, and measurements, the computer industry has paid very little regard to international standards. Industry professionals try to combine established measures such as the ‘kilo’ with obscurely-derived words like ‘byte’ (binary digit eight). In doing so, they break all the rules of English, science, and mathematics,” he said.

“In addition, there are two levels of new words that have emerged. The first level is a group of words that are borrowed from the normal vocabulary. Basic every-day words have a very different technical meaning in computing. For example: bus, bridge, crash, car, nest, highway, bullet, bomb, mouse, bug, and worm.

Excerpt from the First Edition

‘Computer companies have thrived on being leaders in their own field, and on being ‘the first’ to bring the best product to the marketplace. Although this book is primarily made up of paper and ink, in its own right it is a ‘world first’…

‘There will come a time when “public computers” will become as common as “public telephones”; and when 3D will replace your ‘TV’; and when silicon chips will seem as archaic as vacuum tubes. There will also come a time when computers, as we know them, will cease to exist. Until then, this book is about standards and accuracy, and these wither evolve haphazardly or a defined by design… which shall it be?’

What the critics said

One hopes that this dictionary will run into many editions.
Chris Chasling, Directions in Government

A complete perspective to make the terminology even easier to understand.
Inside & Out Magazine

This dictionary has two things going for it. It is compact and it has illustrations. The definitions are also long — sometimes taking up to two columns.
Michelle Gamble-Risley, California Computer News

This book is the best layman’s guide available.
Institute of Management

Very user friendly. Anything but stiff-upper lip, the contents are serious enough though, make no mistake about that. The scope is quite comprehensive too.
New Straits Times

This book is an excellent source of help when you are stuck with some unfamiliar terminology.
Jessica Lee, The Star

Dictionaries are not supposed to be gripping yarns, but this one is a bit like the Sunday sermon: absolutely virtuous, precisely targeted, meticulously researched…as you can probably guess by now, virtually noting has been left out. In fact, I would be surprised if it has been — given Jonar’s commitment to thoroughness and standards. It’s all there. It can’t be faulted.
Jeremy Torr, PC World

Designed for both the novice and the expert.
Computer Publicity News

It is, as a matter of fact, a must read for all computer users… the dictionary is an accurate and current source of information.
John Austin, Books of the Week

Ever wondered what a circuit board looks like? Prentice Hall’s Illustrated Dictionary of Computing shows you — along with lots of other personal computer components too small for the naked eye.
Sun, Baltimore, MD

Nader did a careful and thorough job… the result is a detaiuled reference more akin to an encyclopaedia than a dictionary… the book should make a valuable addition to any computer journalist’s shelf.
Audrey Kalman, Network News 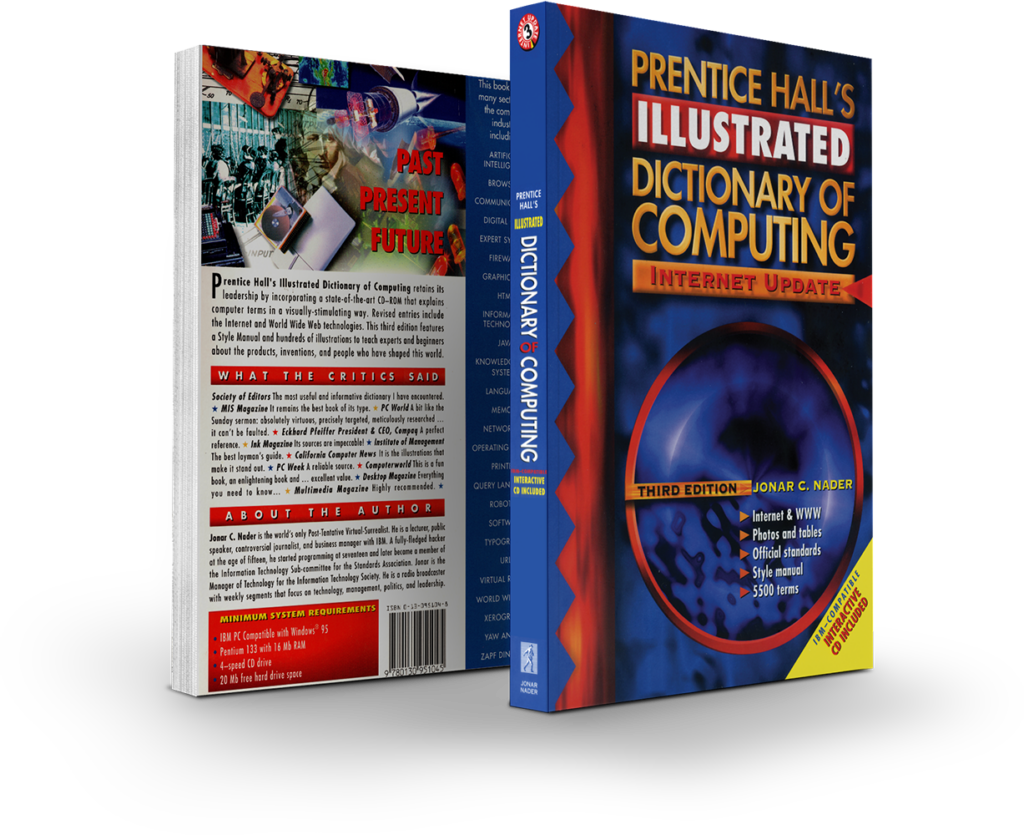 This book was the world’s first comprehensive and most extensive dictionary on the market. It was also the first to incorporate international standards, and to include a style manual (for improved communication) and market data from IDC. 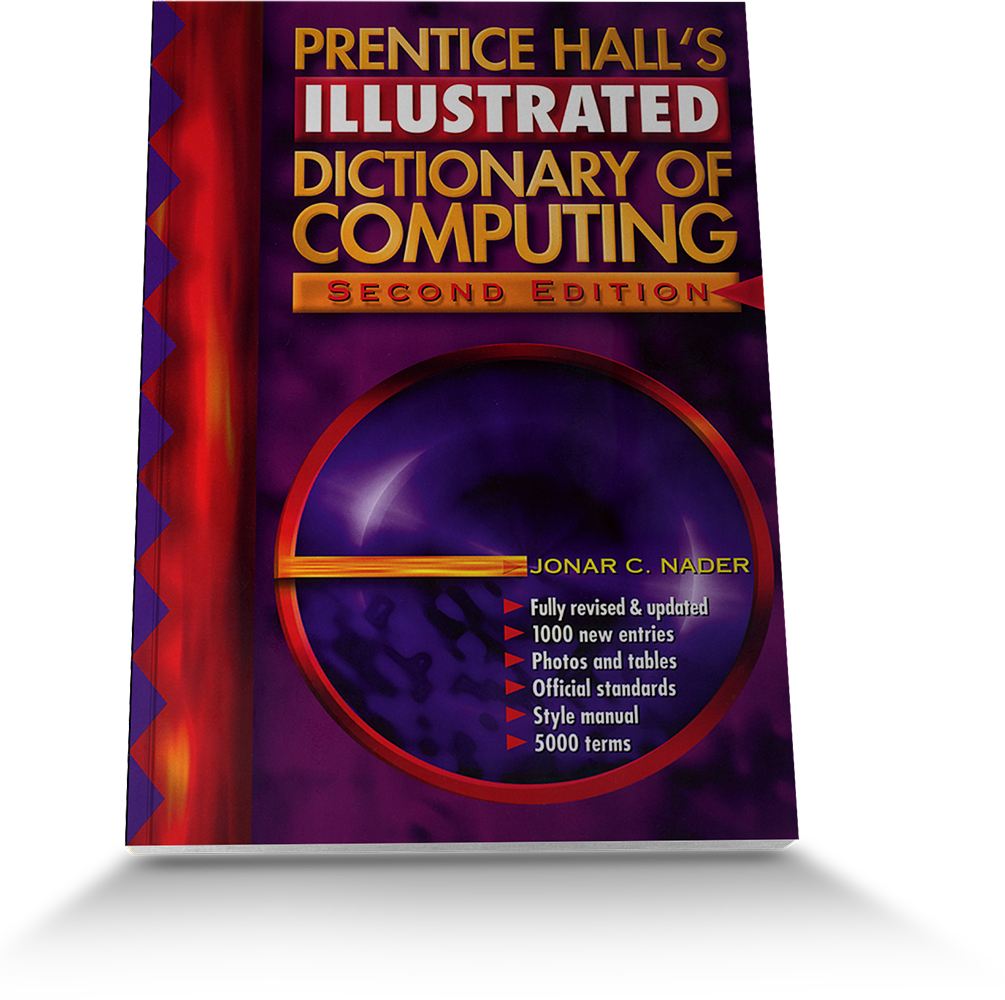 Accurate research figures and up-to-date industry analysis were essential ingredients in the preparation of this second edition.

Valuable information was afforded by the consultants and from the archives and libraries of IDC (International Data Corporation), which provided Jonar with a wealth of industry-specific intelligence gathered from the USA, Australia, and Europe.