One step forward, two steps back

For years I have been warning organisations, governments, and institutions about security cameras that are completely exposed. I was pleased to see that Sydney Casino invested in camera casings.

Mind you, this type of casing is almost pointless because each camera can be rendered useless if someone places a sticker on the front glass section. A can of spray paint does a similar job. Otherwise, hairspray or spray-glue works well to set the foundations for a piece of tissue to be slapped onto the glass to obstruct the lens. In any case, this is not the issue right now. These cameras, placed throughout the casino car-park, ring different alarm bells.

For example, who was the bright spark who installed these without plugging the back-end of each camera. A simple pair of pliers would enable anyone to snip each camera from behind. Regardless, what was even more disturbing was the flagrant way in which the installer left chalk marks across the ceiling. These marks trace the security grid… and worse, they note the number of each camera! Now I ask you: don’t you wonder how incredible and unbelievable some films can be when we are expected to believe that the hero, such as 007, manages to know how to hack into a computer network? 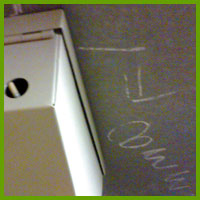 Years ago, while watching one of the ‘Mission Impossible’ movies, I recall commenting about the apparent ease with which the lead character (played by Tom Cruise) and his team managed to map out the entire security grid of a building into which they wanted to enter. My thoughts went along the lines of, ‘Oh, yeh, right, as if anyone can find out the entire network of each security sensor.’

I now eat my words. Thanks to the sparkie who installed these cameras, the entire camera system can be taken out, and also manipulated. All that is required is to find an open door — whether it be a physical one or an electronic one, accessible via cyberspace. Imagine an more horrifying thought: what if the same logic used for the car-park is also used for the gaming floor, or the back room network. If that were the case, and it’s highly likely, we graduate from 007 and Mission Impossible, all the way to Oceans Eleven, where the team was able to hack into the cameras of the casino nerve centre. You would not believe the number of high-end institutions who install million-dollar security systems yet fail to re-set the codes beyond the defaults. Do you want to know how many people’s luggage has the factory-default code of 000? The same laziness exists at banks and government departments. The more grand the establishment, the more lazy and presumptuous its staff who are lulled into a sense of grand security. The more show and pomp that surrounds a priceless painting or rare diamond, the more likely for there to be security flaws, simply because each manger presumes two things: 1) We have such sophisticated systems that we seem to be well protected, and 2) All these lights and codes and sensors must scare anyone from even contemplating a heist.

Study the great robberies and the most daring of escapes, and you will see that the grandest of all were often executed right under the nose of the custodians of the most sophisticated systems. The bigger they are, the more easily they can be tripped.

P.S. I had mentioned to a client who had similar camera casings that they ought to plug the holes. Sadly, this is what they did. No doubt you can spot the mistake. Anyone with a simple wrench can unscrew the black plugs. This might deter the passing vandal, but it does nothing to protect the establishment. It’s exhausting tring to get people to think for themselves. It’s disheartening when those people carry a professional title of ‘Security Manager’.