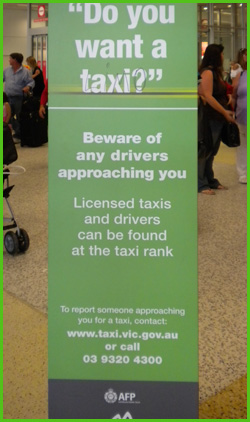 Upon arriving at Melbourne airport, I noticed a sign that said, ‘Beware of any drivers approaching you’. Not just one or two signs, but two at each exit! Each was 6 foot high, urging travellers to report anyone who approaches them, by calling 03 9320 4300. You wouldn’t read about it. I was approached within seconds. ‘Are you looking for a taxi, mate?’. Not knowing what the latest scam was, I called the number and the operator asked me for the name of the person who had approached me. ‘Is the driver there with you now?’ he asked. Are they crazy? They want me to apprehend or detain the man, take his name and description, and then call the number to complain? How stupid. So I told the operator, who at first had no idea why I was calling (he was unaware of the posters), that obviously no-one had thought through the process. He spoke to a colleague and said, ‘Thank you for letting us know’. That was the end of that. What was the point in me calling? Totally useless. Completely pathetic. He could not do anything about it unless I have a name to give him. How do they propose the public to go about this? When approached, we should say, ‘Steady-on ol’ chap, I do declare that you are breaching section 17 of the code, and I hereby insist that you furnish me with your name and ID because I have decided to report you … and oh, please remain here, I wish to detain you until they answer my call… won’t be long now, I’ve been put on hold…’

A few months later, I landed in Melbourne, and saw the signs again. This time, someone had written the word ‘limo’ over the word ‘taxi’. There had been some jealousy between taxi drivers and limo drivers, but that’s another long story. Incidentally, while standing there, waiting for my luggage, I realised that Qantas was boasting about its high on-time departures and arrivals. That was a useless bit of boasting because we had waited 45 minutes to receive our luggage. Why take a 70-minute flight, only to wait 45 minutes for the luggage? The month prior, Qantas had lost my bag! Oh the long stories. Anyway, I had 45 minutes to observed enough material for book. Wow, what can transpire in 45 minutes. The stupidity and inefficiency is unbelievable. Where are the managers?

While waiting for my luggage, I had observed multiple taxi drivers approaching other people. All this was supposed to be illegal. The matter is so serious, that the Australian Federal Police had placed its logo on the huge green warning signs. One man had a badge strapped to his belt. I could not see it too easily, but it looked official, and it had the word ‘transport’ on it with something like the word ‘Inspector’ on it. I figured that the man was a supervisor of sorts. He must have had fake ID. He was an impostor. I think now that he was a regular taxi driver who wears a fake badge so that others do not suspect that he is a taxi driver… until a passenger starts to exit, and then he pounces and says, ‘Would you like a taxi, mate?’ I ignored him. When I reached the door, another man with a lanyard around his neck approached me. I refused his offer of a taxi, and I called that number. A nice man answered the phone, and for the next twelve minutes (I have phone logs to prove it all) he had no idea what I meant when I explained that I was calling in relation to the campaign and the green warning signs. It was as if I called him to say, ‘Hi I would like to order the purple bananas that you have on special this week’. That was the type of confusion that befell this man. Finally, he said that his boss asked him to take my details, and that someone will get back to me. To this day, now eight weeks later, no-one has called me. Why can’t anyone do the job they are given? Where are those blasted managers?

Mind you, after he understood the nature of my complaint, he asked me for the names of the three drivers. I gave him a what-for. He wants me to apprehend drivers. There were three of them. Loitering. And yet we are told that the place is monitored by video cameras. What a lark.

So my dear Department of Transport, and my dear Victorian Taxi Directorate, what is this campaign all about? You see, you are asking people to dob-in a driver, when in fact, it is not illegal for a passenger to accept a lift from an approaching driver. And any passenger, seeing the long queues, would love to go with a driver who offers them a lift. After waiting 45 minutes for luggage, who wants to wait another ten minutes for a taxi! In the future, I most certainly will take the ride. Why was I trying to be a good citizen when on both occasions, it was docility all the way from the people who had posted signs all over the place, asking me to phone, at my expense, to have long-winded frustrating discussions with untrained operators who don’t have a clue about the campaign, the procedure, or the practicality of how it can all work. So in future, I will go with the driver who approaches me. You treat us like fools, and your campaign does not even work. If it did work, why were there taxi drivers loitering with lanyards around their neck, asking people if they want a taxi. If, within 45 minutes of standing around I saw three drivers at one of the many doors, and if I had been approached within three seconds of approaching the exit, then surely you can post an undercover inspector and disqualify the taxi drivers who are infringing whatever rule or law you seem eager to protect.

Give it up, mate!

P.S. I visited the website quoted on the green poster, and I could not find any reference to this or any similar campaign. I searched and looked and clicked. Yet again, a useless sign. I would like to speak with the committee that enacted this, and give them a piece of my mind. What do you people do from day to day? Give it up, mate! 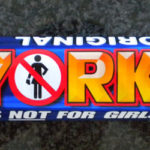 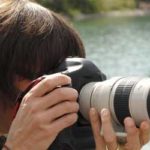