Burger King has shamed itself yet again, thanks to the Swanston Street outlet whose product quality is abysmal. If you recall, I had an issue with this outlet approximately six months prior, as noted in this previous post. After speaking with its head office in Queensland, Australia, I visited the Swanston Street store once again to see if anything had changed, and to see if anyone had erected signs prohibiting customers from taking photos. I looked everywhere, and could not find such signs. Therefore, I drew my small camera and took a shot of the new overhead board.

This time, the Ultimate Double Whopper was the lead item. I love the word ‘ultimate’. It suggests that there can be no better version. An ‘ultimate’ double whopper would suggest that it is the most supreme, never-to-be-improved burger! I ordered one, requesting ‘no onions please’. The order arrived just as I was taking another photo of a breakfast poster, for another blog entry. Unfortunately, I was interrupted by what looked like the same man who had shouted at me once before. ‘Hey, you can not take photos here…’

I told him that I had contacted his office and had made a complaint about his no-photo policy, and that if he likes, he can take it up with head office, and I would be happy to give him my name and number. He fetched pen and paper and asked me for my ID. Naturally, I was not about to comply, for no other reason that it was none of his bloody business. Who the bloody hell does he think he bloody well is, the ghastly man! I was most certainly going to give him my real name and my real number and this real blog site, but he withheld his pen and paper like a five year-old clutching a teddy bear, refusing to share. This went back and forth like a dance, with me holding my hand out for the pen and he retreating. In the end I said, ‘Call the police’. He would not have had far to go. Right outside his store was a police stand where up to six cars could be seen parked along the stretch of road.

I walked outside his store and stood at the entrance, giving him a chance to call the police. If he had pressed his red panic button, I wanted to hang around. It would not look good if I were to leave the crime scene. The second and more important reason for me standing outside his store was to remain within full view of his security cameras for when I unwrapped his burger to photograph it. I did not want to fall outside the full view of the cameras lest anyone accuse me of tampering with the evidence. You see, I wanted to show you what an Ultimate Double Whopper really looks like. If anyone at Burger King wants to argue with me, they had better first check the security footage. This burger is what I was given.

Here I was, a random customer, ordering their lead product. The ULTIMATE. So daring and grand is this burger that the poster asks, ‘Can you handle it’. This is more than a slogan. It ought to have served as a warning to customers to brace themselves for a massive burger filled with the following ingredients, as posted on the Hungry Jack’s Web site: Beef Patty (100% Ground Beef), Cheese, Bacon, Lettuce, Tomato, Pickles, Onion (I asked for none), Mayonnaise, and Ketchup.

I draw your attention to the alleged bacon and cheese. Mine contained none. As for the pickle, there was a shadow of half-of-one on my bun. How can a company, the likes of Burger King and Hungry Jack’s, be in business to dish out this type of product? No doubt Hungry Jack’s head office would be appalled. However, I cannot accept their apology. They make millions of dollars, and they have ample staff and strict policies. If, right under their nose, this type of rubbish can be dished out, then it is totally unacceptable for them to cry shock-horror. If they are horrified at this level of brand-degradation, and if they truly mean it, then I will not entertain any communications from them until they first descend onto that Swanston Street store and shut it down pending a full and thorough investigation. I am sick of arms-length apologies and beseeching. Ivory-tower managers have no credibility. I could not have been the first one to experience such nonsense. It seems that in a six-month period, that store has not changed. I had not tested any other store. I might well embark on a full-scale store-by-store review. All they have to do is step out of line and give me lip, and they will find me reviewing every damned store in every post code. What’s going on that a store like this one can go six months without a review.

It’s bad enough that their products never look anything like their photos. But when a product is supposed to have bacon and TWO slices of cheese, yet is served with none, that says to me that not only are we talking about incompetence, but also about fraud!

This article was written by Jonar Nader, author of ‘How to Lose Friends and Infuriate People’. Jonar is a consultant whose website is www.LoseFriends.com

Is privatisation good for a nation? 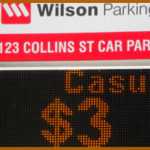 Wilson Parking catches the ‘From’ virus