You might not know this, but if you produced an ad wherein the Rolls Royce statuette (The Spirit of Ecstasy) is in the shot, or if the Sydney Opera House were in the background, you would receive a threatening letter from the lawyers of these respective organisations. They protect their brand and their identity; not because they are precious about their image, but because they are careful about what conclusion people draw about the brand and what it stands for. 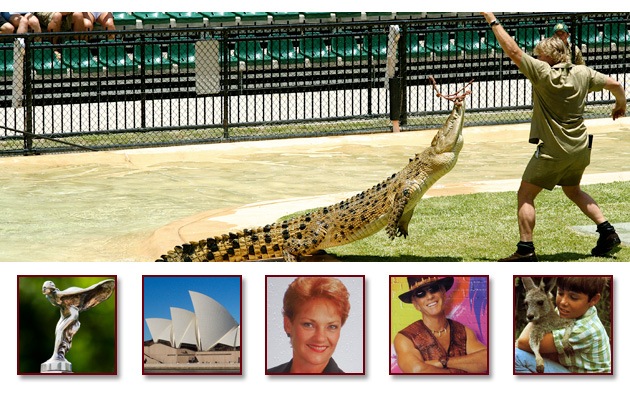 News travels fast, and people’s opinions are shaped easily. One bad move, and an entire organisation and its products could meet their doom. Anyone who was in India when Pauline Hanson was vocal, would have heard complete strangers in the street talking about Australia being a racist country. One person, one statement, can be taken out of context, and the sentiments are attributed to 20 million other Australians. It’s guilt by association.

Paul Hogan affected the Americans with his Crocodile Dundee and his shrimp on the barbie. And the late Steve Irwin coloured the Australian landscape to the point where foreigners now expect to see a crocodile in every back yard. Not to mention what the TV show Skippy did to the idea that Kangaroos come a’hopp’n left right and centre. 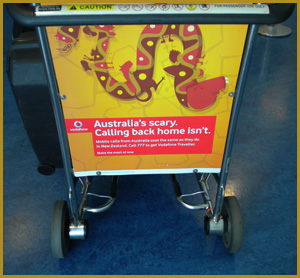 I mention all this because at Sydney’s International Airport, arriving passengers are treated to ads on the back of the trolleys. This one is from Vodafone which shows an illustration of a snake, with the message, ‘Australia’s scary. Calling home isn’t.’ The tag line reads, ‘Make the most of now’. Is Australia so dangerous that if we do not make the most of now, there might be no tomorrow? Do we need to scare new arrivals to such a degree? We might not think much of it, but when you travel the world and you see how people just pigeon-hole countries and brands, you will realise the importance of brand control. This leads me to suggest that any company or any product that wants to associate itself with Australia, ought to seek approval from a Brand Manager. This person might be associated with the Tourism Commission or the Department of Foreign Affairs and Trade.

The ways in which we send out messages about Australia could impact Australia’s standing in terms of its perceived development, intelligence, and social advancement. If you do not believe this, just travel and speak with people. I happened to be in the foyer of a hotel in St Louis, USA. A young, tall, healthy, blond-haired nineteen year-old boy heard my non-American accent and he wanted to know where I was from. When I mentioned Australia, he wanted to know more about it because he imagined it to be a red, dry, desert whose inhabitants kept kangaroos as pets. As I described our way of life, he asked me, ‘Do they have cars in Australia’. And when I answered this question, he was not convinced, so he quizzed me some more, ‘Like what type of cars?’ I mentioned a few brands, of which one was BMW. He turned to his father and said in amazement, as if to report a revelation, ‘Hey Dad, they’ve got cars in Australia!’ Replay that in your mind, using a strong Yankee accent.

Bad news travels far and wide. I was in Melbourne when the Indian protests were taking place. I went to take a look, and I interviewed some of the protesters. ‘The Times of India’ newspaper wrote, ‘Indians in Australia are living in crippling fear. Worried parents in India are recalling their children from Australian universities. Victims have vowed not to go back. Aspiring students and travellers have decided against visiting Australia…’ 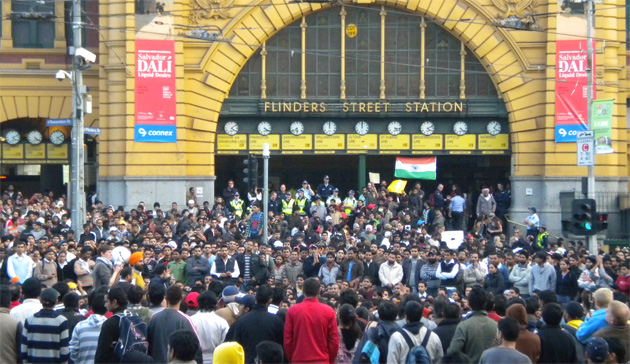 Here is an audio of the protest. I could not understand a single word, but somehow the crowd knew when to cheer.

Mounted police officers were on the scene. The students had stopped all traffic around Flinders Street Station and the surrounding blocks. I spoke with police officers who said that they had no fore-warning about the protests. As a result, they were not prepared, and did not have the man-power to stop the illegal disturbance. All they could do was plead with the student leaders to stop the show which at times became rowdy and turbulent. It went well into the night and into the next day. Two police officers separately told me that they did not want to aggravate the crowd because ‘there are more of them than there are of us’. 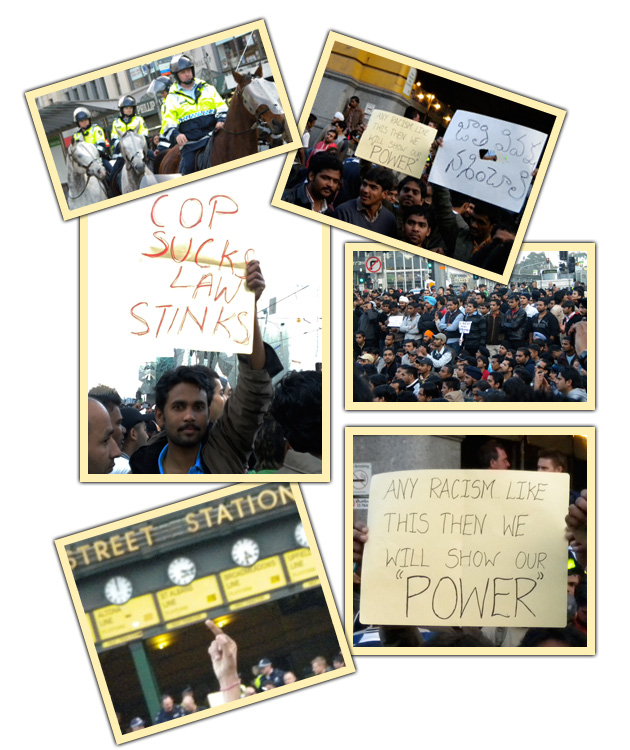 One protester told me that he had his teeth kicked-in while at a train station. Despite video footage, the police did not act. The protest was more about the lack of police assistance, than about violence or racism. Anyway, it all got out of hand, and Australia’s reputation is damaged. One banner read, ‘Justice for the victims, not “sorry”.’ The students were fed up with politicians apologising. They wanted justice. So you see, much like people can’t stand it when corporations do not respond to customer complaints, citizens and members of the community feel aggrieved when those whose job it is to assist the victims, seem to show no compassion. It’s interesting to hear the stories, and then to hear police spokespeople say, ‘We do not want the students to take the law into their own hands’. Good idea. In that case, show us the law in action before communities turn against each other. Tit for tat. Retribution. Revenge. Violence. Bad reputation. We all lose.

Is this a matter of racism? Not at all. Australians are just lazy. You can hear of similar stories at hospitals and train stations and at the biggest department stores and the most prestigious brands. Lazy dimwits who don’t do their job. They have no pride and no concern. They want to get home, pop a pill, get drunk, and go out. That’s all they live for. That, and the footy, mate. It has nothing to do with Indians. What about the case of Aaron Warnecke and Greg Harland, attacked with metal poles while walking home, minding their own business. They were bashed for no reason. Charming. One was hospitalised. All caught on camera. Further threats made. The victims asked for an AVO (apprehended violence order) and the police refused, until three months of community protests. Disgusting. Get off your back side and do your job, whether you work at a hamburger shop or a knocking shop. Lazy bastards. And this image of Australia will not change until community and corporate leaders stop checking the daily stock price. I have said a million times that we need to stop the game of musical chairs. We need leaders/executives to stay in their job long enough to be responsible and accountable, and we need them to never own shares in the company in which they work. Go ahead laugh, or read ‘How to Lose Friends and Infuriate Your Boss.‘ 590 pages to make you laugh some more.

I conduct a lot of business with suppliers overseas. It has absolutely nothing to do with price. If I asked an Australian company to provide me with a quotation or an expression of interest or some ideas about a project, I could wait six weeks before I received a luke-warm response, and that’s only after I have had to escalate the question and re-send my query several times. Compare six weeks with thirty minutes from Asian suppliers who are polite, accurate, enthusiastic, and willing to listen and to perform. It has nothing to do with price. And isn’t it funny how Aussies complain about them over there taking their business and taking their customers. No business in this country loses a client to a competitor overseas. No-one steals them away. The local fat-cats kick their customers away. This week I sent notes off to MelbourneIT and to another internet service provider called Ilisys, asking if they would like my business. I had asked them the same question last week. I am always keen to keep my business local. It rarely works. I bet you that if I do not ask them a third and tenth time, no-one will respond. Lazy buggers. They give us all a bad name. As that police officer said, there are more of them than there are of us. 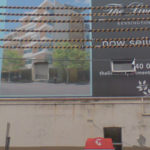 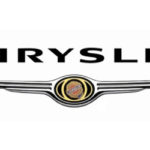