Who can you trust?

Mr Escher showed us how the mind can slip and slide while trying to get a grip on reality. His drawings of stairs that go up, but really go down, when really going up, illustrate the kinds of gymnastics that my mind suffers when it sees statements from people like this tradesman who proclaims that he is an ‘honest man’. I have no reason to doubt him. He might well be honest. However, I just can’t work out how that statement could work in his favour. 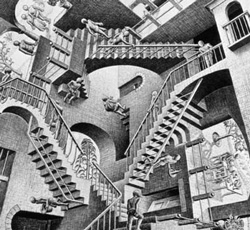 Would a dishonest man not make such a statement? I just can’t rationalise how honest workers can ever get a fair go. Indeed, dirty rotten bastards are a dine a dozen, which makes it so much harder for honest people to be given a fair go. You see, dishonest people have more at their disposal. They can lie, cheat, forge, manipulate, and trick people into believing them. They can make all sorts of promises to clinch a deal. Whereas the honest person might seem less competitive with less on offer.

In the final analysis, I would advise against making such a statement. It raises more questions than it answers. I would rather deal honestly with people, and get them to appreciate my ethical behaviour, so that they can discover it by themselves. Otherwise, any boasting on my part might be met with suspicion.

The card goes on to offer free quotes and discounts. It seems too eager. Such enthusiasm is appealing. Sadly, it is also the mark of desperate man. And while this could all be a genuine attempt at trying to earn an honest living, it can also backfire. Why offer a discount when we have not yet discussed a job or a fee? The questions keep on oscillating to the point of dizziness. Will I or won’t I? Is he or isn’t he… who else is on the board? 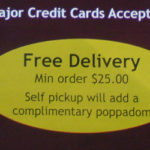 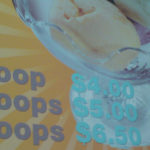