Last month, I cut my American Express cards in half and sent them to the home address of the CEO, Mr Pierric Beckert. At that time, American Express ads appeared everywhere I turned. Not just one full-page ad in a magazine, but several consecutive pages within the same magazine. I thought, ‘Wow, what a big budget!’ Perhaps, it’s ‘Wow, what’s the big problem, and why the massive campaign?’ What was Amex trying to get across? One of the many billboards said, ‘We see you as a person, not a number.’ I, who had been a member for 20 years, was incensed by this campaign, because I had always been treated as a number. It was the straw that broke the relationship.

My letter to the CEO read:

When I transact with a company for twenty years, and I write to its CEO, I expect a response from the CEO. I have found Amex insulting in this way, even when I was trying to assist it for its own good.

You personally ignored me when I wrote to you on 12 October 2009 saying, ‘This letter is the final straw’. I meant it, and here are the cards.

I do not expect organisations to be perfect. However, I do not appreciate seeing dozens of Amex ads, touting slogans that I know are false. As a member since 1989, I see the ads as rhetoric.

One of your ads takes the cake. It says, ‘Daniel: We see you as a person, not a number’. I doubt that very much.

During the past several months, I have been using a Visa card, and spending more than ever. So anyone who had seen my declined Amex usage and assumed that it was all due to the financial crisis, would have been mistaken. There is more than meets the eye.

Wishing you well for the new year.

That letter was sent by courier. It was received and signed-for on the 14th of December 2009. Sadly, until now, I have received no response. Perhaps the CEO was away, or super busy. Or maybe that is the culture through and through. Fearing that American Express had still not registered my request to cancel the card, I phoned and spoke with one person, who transferred me to another who was keen to retain my business. He offered all sorts of financial incentives, which I declined. ‘What do we have to do to keep you as a member?’ he asked. I explained that I was calling to close the account, and was not interested in bargaining. However, one of my issues was that no-one at Amex knew how to engage their brain when talking to me. I had a specific concern about one of its merchants who, in my assessment, was running a scam. He replied, ‘Would you please give us one more chance and allow me to arrange for a senior person to contact you to discuss your concerns?’ 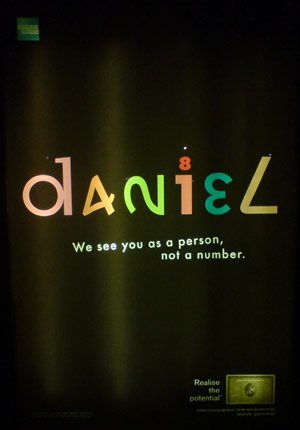 I agreed, and waited. No calls came. I chased this up and was told that two attempts were made. Alas, no messages and no clues and their calls show up as ‘Withheld’ in my caller ID. I receive dozens of missed calls daily. If messages aren’t left, I would never know who called. Anyway, despite my reminder, still no calls. So today, I called this Amex agent for the third time. Finally, a senior person phoned me, and I might as well have been talking to a brick wall. Completely unwilling and unable and uninterested in anything outside the norm. I was trying to point out a merchant who was running a scam. I was told that merchants, like card members, are valued customers.

Why bother arranging for a senior person to call me, after all this nonsense, when the person was not only powerless to act, but also incapable of understanding my concerns?

After twenty years with Amex, I had reached the end of my tether. And to think that a letter to the CEO receives no response, makes me wonder why anyone would bother with Amex these days. I must say that it was always a challenge to use the Amex card. Most retailers shunned the idea. Many would lie about their terminal not working, just so that they could discourage me from using it. Most retail establishments blatantly asked me to use Visa or MasterCard. Even if the CEO did not want to communicate with me, he should have forwarded my letter to the cancellation department for administrative purposes. Anyway, today, while really really cancelling my card and falling silent on the phone, just listening to the diatribe and saying, ‘I have nothing to say’ whenever the senior person paused for a response, he told me that my Gold annual membership had been charged, and that he will reverse that charge (as well he should). I also told him that I was happy to forfeit any remaining reward points.

The lesson in all of this?

1) Corporations need not saturate the market with advertising until they first work out the reasons behind the issues that plague them. To have to emphasise that Amex treats people as a person, not a number, raises more questions than it answers. Why did they think that the public thought that Amex treats people as numbers? Why must this point be made? Why tell us about it? Just go and treat people well. No need to advertise it. Just do it. Why would a corporation spend millions to advertise something that should never be uttered. What’s next? Ads to say that Amex cares about staff and the Pututu Beetle of the Trundrjanian Forest? Or 600 billboards across the city to say that Amex pays all its taxes? Or a $2 million campaign to say that Amex staff never sexually abuse young employees? Do you see how it would raise more questions that it would answer!

2) If you are going to make a promise, you had better be able to deliver on it. If a 20-year member cannot ever get a CEO to respond to a query, then either the CEO is way too busy, or the CEO does not care. Or the mail filtration system keeps the CEO in the dark a la ‘Yes Minister’. Perhaps I should wake up to the fact that a customer like me is not important enough. Modesty prevents me from telling you how much I might have spent with Amex over that period, but I dare say that it was considerable. Irrespective of the amount, and whether it’s one thousand or one million dollars, weak is the person who treats clients differently, based on their spending capacity. If a company cannot deliver the same level of service to all its clients, then it is a ‘using-abusing’ kind of sycophantic company that scatters fake smiles and manipulated courtesies.

3) If your staff can only regurgitate policy hogwash without really understanding the question, you would be better-off running a recorded message and getting rid of the humans. At least customers would not blame a machine for being unable to listen or to think or to communicate.

4) If you are going to record calls ‘for quality and assurance purposes’, you had better run a live feed to all the senior managers’ desktop computer so that managers can hear what’s going on, in real time. By the way, some time ago, an Amex staff member was so bad, I felt it necessary to complain about him, so I asked him, ‘What is the name of your manager?’ He gave me a name. It turned out that it was his own name. He lied to me so that if I were to write the letter to complain, it would have gone to him, and not his real manager. How sneaky. I twigged after I hung up. Oh, the many frustrations I have had with that company.

5) The funniest of all my interactions with Amex in the past two weeks (as well as during the past three years) were the endless queries about my date of birth and my password and my address and phone number and postal address etc. I kept telling them, dozens of times, every time, not to call me and other clients and ask for such private information. It is insane to call people and say, ‘Hi we are from American Express and we first need to verify you for security purposes and we will not budge and we will not help you until you break the very rule that we have made you swear and sign never to break — namely to tell a stranger over the phone your vital password which you must never divulge but please divulge it to me!’ And I could never get through to them.

P.S. For more about my Platinum Amexperiences, click here.