Long before the American Express Platinum card was launched in Australia, I had an ‘American’ American Express card issued out of the USA. It was not by choice. I travel a lot, and one day I was in the USA, stuck, stranded… long story, and so I needed to urgently top-up my AT&T calling card during a crisis. The AT&T operator went through the whole procedure and asked me for my Zip Code. I said 2000. And she said that the computer could not cope with four-digit zips. Well, what could I do about it?

Despite all the globalisation and internationalisation, a traveller cannot make a phone call because a global phone company was so insular that it presumed that the whole world had zip codes that were similar to the US standard. How can programmers and executives be so myopic to presume that zip codes are the same, the world over? How can computers send a rover to Mars, yet can’t acknowledge that I am a bona fide customer? For that reason, I had to have an American card from the USA, using the US system. And so I ended up with a Platinum Card well before the Platinum Card was launched in Australia. The annual membership at the time was around $900, I think. I never did see the benefit in it. Despite the grand promises of great assistance and contacts, I was disappointed. For example, I was in New York and noticed a show called, ‘A funny thing happened on the way to the forum.’ I had once seen the old movie by that name. It was such a wonderful movie, that I arranged for people to call every video retailer and ask for it. There were so many calls being made about this movie, that it was later released in Australia, perhaps on the thrust of the perceived demand! The show in New York City seemed like the perfect one for me to see. The show was sponsored by American Express. How about that! The Platinum Concierge service boasted a world-class facility to obtain tickets to all the grand events of the world. Sadly, Amex could not secure a ticket for me. So what’s the point of being a member, if Amex can’t obtain tickets to an Amex-sponsored show? Useless. I walked up to the theatre and purchased a ticket as easy as pie.

Another time I needed to be in Minneapolis or thereabouts for a television interview. I simply could not find anyone who could book a hotel room for me. Not a five-star. Not a four-star. No star at all. Every hotel room was taken due to a convention boasting 80,000 delegates. No rooms at all. So I called Amex. No luck. I called Hilton Honours. No luck. I called Qantas Travel. No Luck. I called Internet Travel. No Luck. I called Starwood Club. No luck. I called Hyatt Gold Passport or whatever it was called in those days. No Luck. What’s the point of all that metallic membership when no-one could help me? So, after all that VIP nonsense, I consulted the Yellow Pages and telephoned the first hotel that caught my eye. It was the Hilton. I dialled the number directly. And within two minutes my room was booked and confirmed. It makes you wonder how I managed to secure a room after one phone call, while no other VIP centre was able to assist. After a while, I cancelled my Platinum. I never knew how to extract value from it. One of the benefits was a stunning leather diary. A perk of membership. The diary would arrive on my desk in May of each year. How can that be useful? Sure, it takes a long time in the post, and such are the disadvantages of living so far away. But the sad fact was that the diary was post-marked March, each year. Another feature of the Platinum card was the promise of two business-class tickets for the price of one. I could not see the big deal, given that the prices were inflated. I just ignored it, and switched to Gold. Some years later, a cheque arrived from the USA, along with a legal letter, saying that a Class Action had taken place in the USA and all members were being refunded their fees, by court order, due to a judge finding that the two-for-one scheme had been deceptive or misleading, or something like that.

Anyway, that is all history now, because after twenty years as a member, I cut my cards in half and sent them to the home of the CEO. To read about the straw that broke a twenty-year relationship, click here. 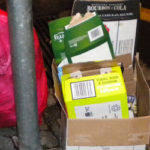