My office had sent out over 1000 registered parcels containing valuable and time-sensitive items. Forty or so went missing. We called Australia Post to check. After waiting for ten minutes on hold, the postal operator said that she could only look-up one serial number at a time. We would have to hang-up and call forty times to check on the missing items. If we average ten minutes, that amounts to a full day’s work, for something that should take 10 seconds x 40 numbers, which comes to less than seven minutes.

Upon complaining to the supervisor, we were told to send a fax, detailing the missing items. After repeated calls and letters over many weeks, they replied saying that they cannot look up 40 numbers because they do not have the time (seven minutes) for such things. Yet it seems that they had the time to take my money for a thousand 3-kilo bags at approximately $8 per bag, each carrying half a kilo; so I paid for 2.5 kilos that I never used (no doubt landing them a huge profit). On top of that, I purchased the additional ‘Registered’ service with insurance (which is nothing more than a sticker in terms of cost for Australia Post). In all, they made a packet. That added another $2000 or so to the expense, not counting the contents (books and videos) worth hundreds per parcel.

When it came time to query why they lost my important parcels, whose disappearance caused me to lose opportunities, they did not care. I escalated the matter to their managers (plural) and legal officers, who snubbed my company and our request. It took over one year of effort, because we started to fight the issue on principle.

Being a government instrumentality, they were under the assumption that I could not sue them. In truth, many lawyers with whom I spoke were also under this impression. Legal experts advised me that there was nothing I could do. I persisted and pursued legal avenues, and won, because it was essentially unethical and wrong. Australia Post made my case easier because they had sent a defence lawyer who did not know what he was talking about. I had previously given them every argument in the hope that they would see the error of their ways. No-one paid attention. It was arrogance in full flight. How sad.

During the hearing, the Australia Post lawyer had the gall to say that I was cheating the system because I had purchased a national 3 kg red bag, and used it to send parcels from Sydney to Perth. He estimated that if I were to send the parcels via regular post, I would have had to pay $9 instead of the $8 I paid per bag (plus $1.50 or so in registration). You can see why I was fighting on principle. A national bag, is a national bag. The fact that 10 out of the 1000 I purchased had gone from Sydney to Perth, was turned against me as if I am abusing the system. My reply reminded my friend that I would be happy to pay him the ten dollars difference if he, in turn, would pay me for 2.5 kg that I never used as part of the 1000 bags that I purchased. The bally cheek! Besides, he was comparing what it would have cost if I had used regular post from Sydney to Perth. The silly man should have known, had he read his brief, that 700 or so bags went to Sydney CBD and Metro areas. Using his logic, and using regular post, that would have cost me $5.70 for 20 kg. Yet I paid him $9.50 for half a kilo. How’s that for a lopsided argument. Who’s abusing who now?

Australia Post’s second argument was that they had lost the parcels, and they admitted to this, but they denied responsibility. Apparently, I was not supposed to have placed the ‘registration’ stickers onto the red bags. The Member hearing our case asked, ‘And how is a customer supposed to know that the registration stickers are not to be used in conjunction with the red bags, considering that the registration stickers are promoted as a service that can be used on any parcel?’ In response, and with contempt, the lawyer pulled out a massive legal binder and pointed to some gobbledygook like Statute 7s Subsection 5 of Clause b5a.2.3.6 of the Act of 1972 as amended 1987 with Parliamentary blah blah blah. 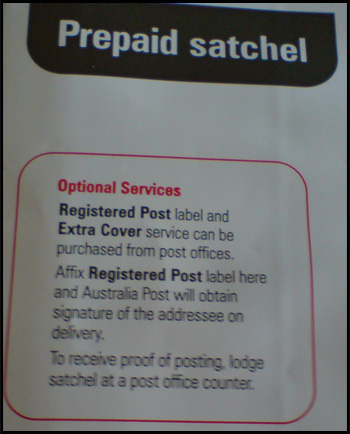 All along, during the many months of correspondence, Australia Post kept insisting that the registration stickers cannot be used on the red bags. I would not be telling you this story if it were not for the recent innovation at Australia Post, which not only promotes the use of the stickers on the red bags, but has the impertinence to print this fact on the bag itself, and provides a rectangular area within which to place the sticker! Yet, all along, they made out that I was doing the wrong thing, despite taking my money and saying nothing about it! If the registration of 1000 red bags was null and void, perhaps I should have sued for a refund, due to their admitting that registration was not acknowledged, which means that I had paid for a service that they did not deliver. The bally cheek.

What can we learn from this? Don’t take money, promise a service, provide a phone number, keep people waiting ten minutes, and then say that you can’t help them. When a client escalates the matter to a supervisor, it would be a good idea to wonder why someone feels that the matter needs extra attention. When the client escalates the matter to the regional management team, it’s time to engage some brain cells. When a client enters into correspondence with your legal officers, and furnishes a thirty-page report, it’s time to sit up and pay attention. When the client sends you a summons to appear at a hearing, it’s time that someone reads the brief and nibs the jolly thing in the bud because the facts are plain for all to see. Pomposity and snobbery towards a client who is one of the largest clients in the district, does not augur well in front of an impartial judge who will only wonder how an organisation the size of Australia Post can treat customers so poorly, and wonder how the many layers of management could not make a decision to rectify an obvious failing. No-one begrudges Australia Post for losing some items (that’s if they were not stolen by unethical staff), but when the company mistreats its clients, who keep it in business, then it had better reconsider its statement of ethics, which says, ‘Australia Post is committed to conducting its business with integrity, honesty, fairness and in compliance with all relevant laws, regulations, codes, corporate policies and procedures.’ 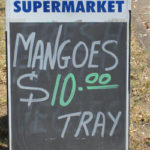 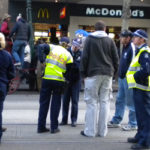