One day, out of the blue, I felt that I should support my local small business, rather than always shop at the huge supermarket. My local Woolworth’s is an excellent establishment. However, I felt that an occasional visit to the small store might be the right thing to do, even if I had to pay a little more. That very day, I noticed that the small business man was advertising mangoes at $10 per tray. Sounds like a bargain. I drove in, parked, and guess what I saw? 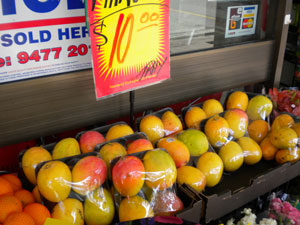 The tray in question contained four mangoes. That street sign ought to have read, ‘Mangoes $2.50 each’. If that were the case, I would still have gladly paid that price. But the lure of a ‘tray’ made me feel that I was being conned. So I took this photo and walked away. Such shenanigans are not becoming of a small business. I will no longer trust his street signs, or waste my time.

Below is another example of small business people missing out on making customers. This small bakery was one that I had frequented regularly from the day that I moved nearby. Every day I would purchase a range of cakes and breads. Within two months, the quality started to decline. Walnut logs started to resemble walnut-crumb logs. The nuts were getting smaller. So, within two months of being a great customer, I stopped going there. That was eleven years ago. Imagine what a customer is worth over eleven years. Then the shop changed hands. Under new management, they started making excellent laminations. I started buying two dozen at a time for the office and for friends. Within two months, the laminations became smaller, and no longer made daily. The trays were cold, straight out of the fridge. This changed the texture of the cakes. So I stopped buying them. The store changed hands one more time, so I thought to support the new management. As you can see from the photo below, the image on the left is their idea of a date scone. The image on the right is the one from Bakers Delight only one minute up the road, in the supposedly evil shopping centre. Small business owners are quick to criticise the large operators or the well-managed franchise groups, yet they never seem to stop and see how small-minded they are when it comes to focussing on their core business.

The photo below shows a sushi train on the left. Notice that there are four staff members, and not a single customer. This is near Mary Street in Brisbane. Exactly opposite is a stir-fry eatery, which is shown as the photo on the right. These two establishments are opposite each other, in a small street. Day and night, the sushi train people could look across the road and wonder why that Asian eatery is so full, that people have to line-up, all the way out onto the street, to place their order. That restaurant does a roaring trade in both dine-in and takeaway. Being new to the area, I was unfamiliar with either store. And being in a hurry, unable to join the queue to place an order, I decided to frequent the sushi train. Within fifteen seconds, it dawned upon me as to why no-one dines there. The selection was sparse. The plates were approximately five seconds apart. And worst of all, the meal portions were measly and useless, at twenty-parts rice to one-part fish. If there was not the proof (right before their eyes across the road) that there are plenty of customers around, this Japanese shop might have made all sorts of excuses. I wonder if they stand there wondering why they have no customers? Maybe Brisbane folk don’t like Japanese food. Ah, that’s it. Problem found. Mystery solved. Woe are we. I shall keep my camera poised to snap the inevitable ‘For Sale’ sign when next I fly up to Brisbane. 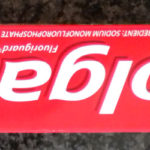