Blood in mid-air to Auckland

I have always wondered why pilots are so very honest. Whenever we have had any faults or delays or technical issues, they have announced the news to all the passengers. Mind you, they do not give us any options, such as the option to leave the craft if we happen to be stuck on the tarmac for hours while they find a fuse for the hydrofribulatorating-gizmo whose shaft broke a few seconds ago. But they do spill the beans quite nicely. On a few occasions, I have wondered if honesty is always the best policy.

I happened to be on a flight from Sydney to Auckland. One of the passengers had a medical problem and was bleeding for over an hour. I really do like to mind my own business. I get my fair share of the limelight while on stage, so I recoil and prefer to be incognito while I am in public. Unfortunately, no-one seemed to know how to stop the bleeding. The patient and his wife (on holiday from the UK) were becoming distressed, and it was not going well, despite the cabin crew doing a great job and showing the utmost of care and concern.

It seemed impossible that I could hold my tongue much further. It was none of my business, but I could see that they needed help. So, sadly, like a sergeant-major, I stepped in. I went up the front and asked to be kitted up. I donned the plastic gloves, and in I went. ‘Allow me to handle this,’ I said, authoritatively. In times of crisis, people respond well to authority, especially to someone wearing the right gear. I took charge of the situation, relieved some people of their duty, smiled a lot so as to settle everyone’s nerves (especially the patient and his wife), and did what any caring citizen would do. Years of first-aid and loads of exposure to medical emergencies, came in handy (decapitated bodies were a normality for me, from the age of ten). After assessing the patient’s medical history, I could guess (calling on my years of experience and general medical knowledge) what the problems were; and this helped in bringing the situation under control in approximately thirty minutes. Everyone was happy. The crew was grateful, and the wife thanked me privately. Other passengers were supportive and offered their moral support and encouragement.

The senior flight manager presented me with this impressive bottle of Champagne. I appreciated the kind gesture, but I re-gifted the bottle to a friend in Auckland, because I do not drink alcohol. A few weeks later, I received an unexpected letter from Qantas.

Anyway, back to the pilot. He had to pre-warn the ground staff of the situation on board. As a result, the medics were on standby. Upon touchdown, a special crew comprising medical experts, a Quarantine Official and someone from the Health Department boarded the flight to assess the patient.

The unfortunate part of this entire series of events is the bit that happened next. The pilot was honest. He announced the situation to the whole flight. The incident occurred in the Business Class section. The separating curtains had been drawn to maintain privacy. So it was not necessary to involve every passenger. I guess the pilot was following the rules. The problem was that he said something like, ‘Ladies and gentlemen, as a result of a medical emergency with one of our passengers, we will be unable to leave this aircraft until we have been given clearance by the Health Department. Please remain in your seat. Special Quarantine Officials and medical personnel are making their way on board…’ By the time we had landed, the curtains were pulled back, and so now everyone on the left side, could see the fuss at the front. 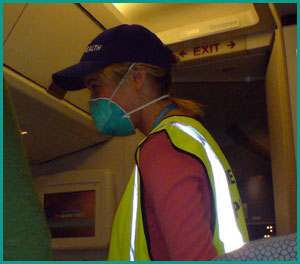 Indeed, the medical crew arrived, each wearing masks, coats, and carrying special equipment. This dramatised the whole situation to a new level. Passengers were now becoming concerned because all this happened… wait for it… the very week that the globe was on high alert about the Swine Flu. This was the week when every pharmacy had run out of masks. It was when every newspaper carried front-page updates about the death toll. It was the week when public concern about the mortality rate of anyone contracting this airborne disease was at its highest. Most of the passengers would have instantly thought of the worst: mandatory detention of all passengers at an isolated quarantine hospital. People would have wondered if they were contaminated, and if they would have to be taken to an outpost. Was this the end? Were we doomed?

Luckily, it was not swine flu. We were allowed to leave the craft. As we walked off, each of us was screened by a host of body-heat detectors trained on us, as more masked medicos watched the computer monitors.

Drama in mid-air. It made me wonder if a few white lies, or saying nothing at all, might have allayed some fear on the part of the passengers who instantly thought of the worst. I am not sure if honesty is always the best policy, especially in these preliminary matters, and specifically because no-one on board could have done anything about it. No-one would have had the power to protest. New laws had been enacted to give authorities the power to detain anyone suspected of carrying the disease. 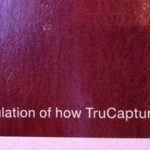 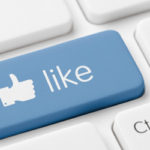 Beyond the Arab handshake