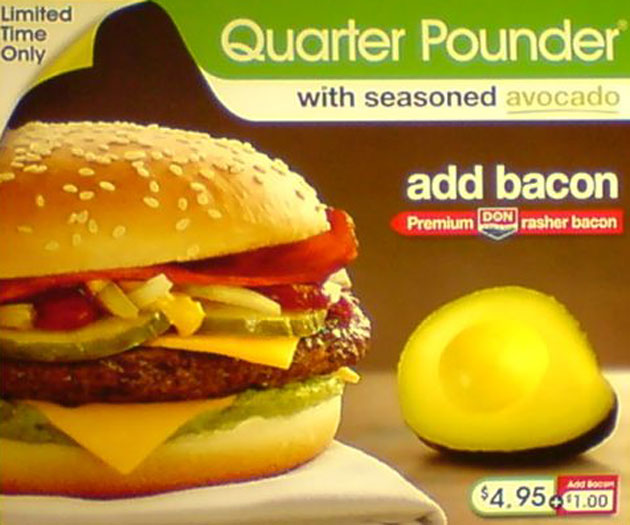 Mouth watering photos are amazing. When oh when will the Directors of McDonald’s stop these types of misleading promotions?

Franchising is a huge business. At its core is the notion that when something good comes along, it can be perfected and then replicated with ease. Franchise owners (the franchisees) mortgage their home in order to borrow funds so that they can purchase a license to operate within the strict rules as stipulated by the franchisor. After stringent application processes and interviews, franchisees are chosen if they fit the long list of criteria. The exhaustive check-list includes cultural, financial, and professional considerations.

Joining a franchise has many pitfalls. Theoretically, the upside outweighs the negatives. A strong franchise system gives small-time players access to big brands as well as systems and procedures. Compliance affords the small-business operator no-brainers about uniforms, packaging, and store layout, as well as contacts and contracts with suppliers.

What could be simpler than making a hamburger? The franchisee does not have to think about the type of toaster, deep fryer, fridge to install. Everything is spoon-fed. Just follow the operator’s manual. How hard can it be? The answer to this question would seem to be: ‘excruciatingly difficult’.

The franchisors tell the public that the ‘One who runs the store, owns the store’ as if to suggest that we can be assured of extra-special attention, and as if to insinuate that salaried executives cannot be trusted to treat the store as their own. The franchisor just needs to find serious business operators who can put their money where their mouth is. In other words, find someone with ‘skin in it’. In return, the franchisor provides everything, even access to the secret herbs and spices, and permission to use the brand — the brand that promises consistency.

Academics who love case-studies often speak about McDonald’s as one of those fascinating brands that transcend socio-economic groups, saying that it’s the only restaurant in the world where its car-park could easily accommodate a Rolls Royce or a beat-up old Holden. Rich and poor can share the space. Go anywhere in the world, and enjoy a delicious meal at an affordable price. In fact, many economists monitor the price of the Big Mac in a range of cities in order to work out the economic pulse of the local standard of living. Well, that has all gone out the window. I have no idea if McDonalds utilises mystery shoppers. One of its stipulations in the franchise contract ought to state that the one who owns the store ought to do more than run the store. In the case of the McWhirters store, that person should also jolly-well work in the jolly-filthy store. Who owns this store in Brisbane? It is ghastly.

Right above the head of the serving staff (whose personal hygiene is a dead-giveaway) was this image of the new Quarter Pounder. Yum; one would think, as I did one day. When will I ever learn? The waste-of-money was handed to me, and you can see where I pinched a piece from the bun to taste it. Stale cardboard came to mind.

Under the covers was a sorry culinary disaster. I have never watched Gordon Ramsey on TV, yet I am led to believe that he swears a lot. With this utter rubbish in hand, as the photo reveals, I came close to a Ramsey moment. What the jolly buggery bollocks do they call this?

Of course, who am I to complain? Perhaps the sales figures will show that thousands of customers disagree with me. The Franchisee might be putting his kids through college, and McDonald’s might be creaming the royalties. So long as that happens, my opinion does not matter. If I am to going to be so fussy, perhaps I should shop elsewhere. And that’s what I did, immediately after I dumped the Quarter Pounder into the bin — but not before staring at the security camera, and gesturing with wide arm-swings in case anyone ever monitors the recordings. Now there’s a thought: perhaps the one who owns that store can re-direct the cameras towards the kitchen benches and take a live-feed to their home. 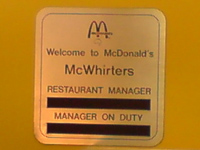 McCam would be a cool idea. Why not stream it all to the web so that we can check-out the restaurant before we go and waste our money. Mind you, I am not sure that such an establishment, dishing out such inedible carbon, can be called a ‘restaurant’. And as for this grub being affordable, I am not sure how money-in-the-rubbish offers value. Well, I guess it keeps people employed. It might all be part of the stimulus package. By the way, Neither the Manager on Duty nor the Restaurant Manager dared to reveal their name. Perhaps they were OFF duty!

P.S. By accident, I came across the Wendy’s site. In all my years of travel, I had seen and known of this brand, but if you had asked me about it, I would have presumed they specialised in ice-cream. I had no idea Wendy’s made hamburgers. Whenever I stay in Auckland, New Zealand, I see a 24-hour Wendy’s outlet, but it is not at street-level, so I shall make an effort to go in next time. Their site specifies the contents by quantity. They specifically promise a certain quantity such as four slices of bacon and the four slices of gherkins. Good idea. They also say that they slice the tomatoes on the spot, and that their meat is never frozen. It all sounds good. I shall go there and report back to you. 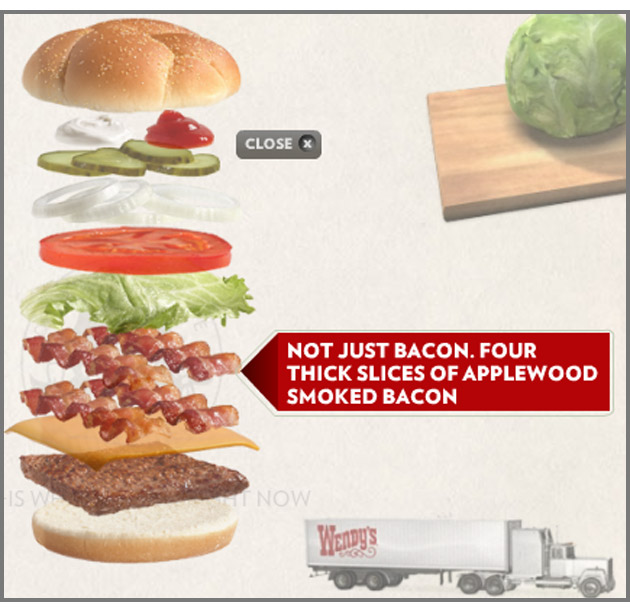 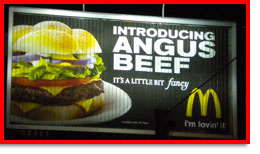 I have not yet tried this fancy Angus Beef burger. It appears to be the largest creation yet. Somehow I am not hopeful. I shall give it a try, with camera at the ready. Will let you know. Unless you have already tried it. In which case, do tell. 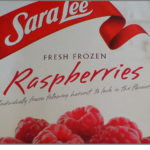 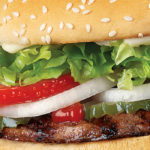