MLC sent a letter encouraging me to switch from paper-invoices to direct-debit. It said that by choosing direct debit we’re doing the planet a favour by helping MLC to reduce paper consumption by 20 percent. I would have liked to have been a fly on the wall of the meeting wherein this daft idea was floated and argued. The General Manager of Retail Insurance Operations, Mr Frank Lombardo put his name to the letter which says, ‘Go direct debit and receive a 12 month magazine subscription!’

I do not understand how MLC and Mr Lombardo are trying to save paper by encouraging people to start receiving glossy magazines whose pages per issue can run into the several hundred. Not to mention the glue for the spine and the postage in the mail which uses trucks that use petrol and spew out pollution.

If MLC is trying to do the planet a favour, how does direct-debit save the planet by offering this to the first 1000 customers who switch? If, like me, one thousand customers pay annually, then 1000 sheets of paper are used to service our needs. If we switch to direct-debit, this removes 1000 sheets from the plant, and replaces them with 12 magazines. The ‘Australian Women’s Weekly’ magazine might contain 300-odd pages (sometimes more), with full colour inks, coated paper, glossing cover, glue, inserts, and a plastic wrapper for postage (not counting the outer wrapping or boxes that carry 1000 magazines in a pile from the printery). That’s 3.6 million pages of planet-destorying paper.

MLC shifts its postage and paper charges onto the shoulders of someone else. What would have amounted to one invoice, once per year, would be replaced by a bulky magazine once per month. 1000 sheets versus 3,600,000 sheets of wastage. Not counting the pollution of later disposing those magazines. Airplanes try to save fuel by removing one olive from each business-class passenger’s meal. The significance of one olive is huge. So how does a bulky, heavy magazine save the planet when its weight is carried around dozens of times, from the trees, that become paper, that becomes rolls, that are shipped to the printer, who ships to the publisher, who freights to the warehouse, who moves magazines to the mailing centre, who sends it via post until the paper does the round-trip from the home, to the yellow recycle bins, to the trucks, to the recycling centres. Count that carbon emission and tell me how Mr Frank Lombardo and his team can boast about their company being carbon neutral? If those 1000 MLC customers remain clients for 30 years, that’s 30,000 sheets. If they take-up this offer, even though it is just for a one year’s subscription, that’s 3,600,000 sheets (give or take a million). Nothing stacks up! And don’t forget that the middle-steps and processes cost money, and money takes a lot of pollution to make!

I note that the request to switch came in a four-page letter (on two pages), with an envelop enclosed. If that went to one million customers, we have two million sheets “plus, plus”; as they say in the world of tax.

I wonder if it would have been smarter for MLC to have made arrangements with publishers whose content is available on-line or via smart tablets like iPad. MLC Limited could have avoided this green embarrassment. Or, maybe this whole idea emanated from the publisher of these magazines, trying to cope with the idea that fewer people are buying magazines because people are becoming green-conscious. So is this campaign trying to tell those who are doing the right thing, to stop doing the right thing, and start taking an interest in paper-based magazines? 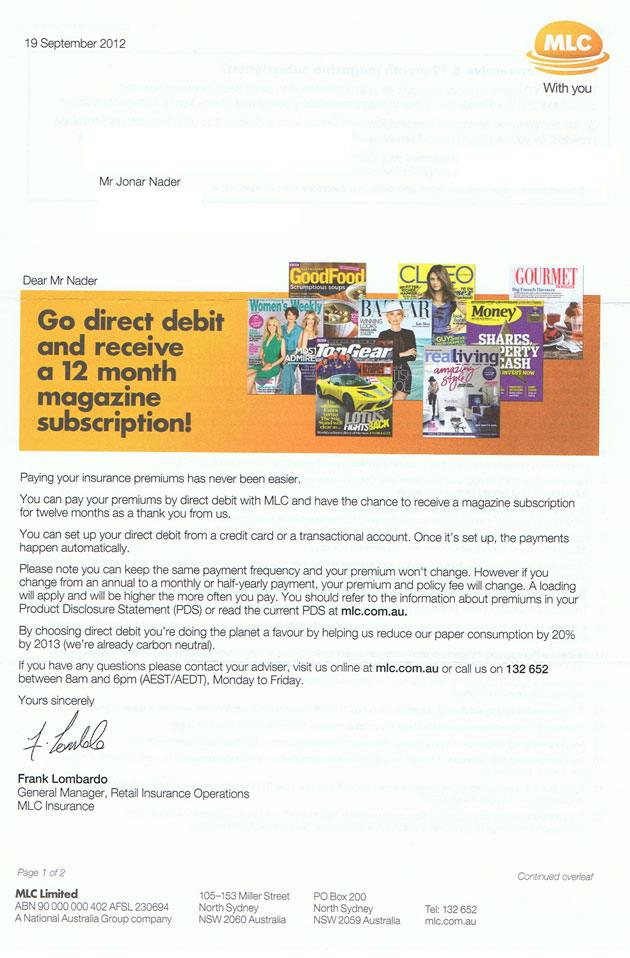 * The 1965 song was called ‘What the world needs now is love’ written by Hal David. The music was composed by Burt Bacharach. The song has been recorded by over 100 artists; the latest being a 2011 recording by Ronan Keating of The X Factor.

P.S. Don’t forget that some clients need their paper invoice for their estate, spouse, accountant, bookkeeper, archives, tax department, etc. So people might still need to print the pages/receipts out at home using their grossly inefficient paper, and super expensive inks & toners that reach $5000 per litre. So what about all the energy, electricity, equipment, paper, inks, and time that would be expended trying to print something inefficiently at home (while MLC reports that he has done it’s bit)? 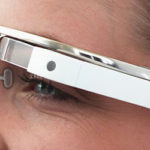 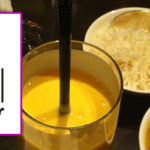